This is the blog from our 2012 season. For more up to date info on Marj Rabba and the Galilee Prehistory Project please go to: GalileePrehistoryProject.org
Posted by Achiii at 3:14 AM No comments:

Posted by Marj Rabba Team at 11:40 AM No comments:

Wrapping up the 2012 Season

Today (Wednesday, August 15th) we swept out Areas AA and BB for final photos.  Afterwards it was back to Ort Braude College to finish up processing pottery and lithics.  Tomorrow, everything has to be packed up for the return to Jerusalem.  It's hard to believe that 5 weeks have come and gone.  We learned a lot, we laughed a lot, we ate a lot of schnitzel and drank a lot of Jump Juice, and who knows maybe we'll all be back next year!

The other day I was washing bones when a guy with a video camera approached us and started interviewing people. I didn’t expect him to be interested in what I was doing so I went about my brushing as if he wasn’t there.

It wasn’t until I had just started to scrub a huge chunk of bovine jaw that the man approached me and started to ask me questions. I agreed to his interview, and while holding onto half of a cow mandible I gave him my name, Francis Flanagan, and explained to him what I was doing.

Now I had never been interviewed before, and thus was pretty nervous about the whole thing. So I tried to be articulate as possible and did my best to speak as if I knew what I was doing and that I wasn’t a complete rookie. But really there wasn’t much to say about the situation anyway, I was washing off some bones and sorting them out, not exactly enough for a news article. Still I said what I could and let him get some close-ups of the jaw piece, a gnarled hunk of bone with every crevice crammed with mud.

He then left to talk to someone else and I went back to brushing cow teeth, hoping that I hadn’t made a complete idiot out of myself on camera.

Posted by Francis at 9:48 PM No comments:

Over the course of the season I’ve been working in trench BB, mostly in the H1 and H2 squares. Initially, H was a five by five meter square. At the beginning of the season, we extended the section by opening the five by two and a half meter square, H2, to see if we would be able to find the continuation of a wall and the other half of two stone circle features found in H1 during the previous season. 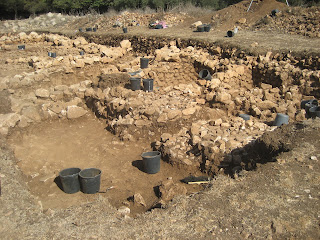 We started out by picking at the ground with large pickaxes that are better used in rocky terrains to loosen the topsoil, rocks, and tureas to rake the loose dirt into the buckets. Once we got down to the cultural layer of soil we switched to using small pickaxes, trowels and dust pans. As we removed soil in H2, we noticed it was very rocky so we removed rocks and soil in a level pace until it was clear. There were certain features such as the continuation of the two stone circles which were both about one and a half meters in diameter and the continuation of the west wall which was seven and a half meters in length in H1 and H2. We also found another wall near the west circle feature that connects to the wall that divides H1, H2, and the section that Allen Reinart has been excavating. 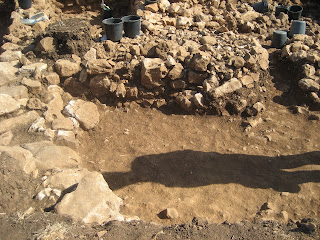 Once H2 was the same level as H1 we switched to working in H1. In H1, we worked on removing the north stone circle feature which was about 2 meters in diameter to see what was below it and lowering the entire H1 square as well. Underneath the stone circle we had an arc of stones on the west side of what had been the stone circle, which we aren’t sure if it has cultural significance or if it is just rock collapse. During the leveling of H1 we found what we thought was a continuation of the wall coming from the bulk and a line of stones that connect to the wall bulk and go through the arc of stones. We are still unsure whether either of these features is a part of the rock collapse or have cultural significance. 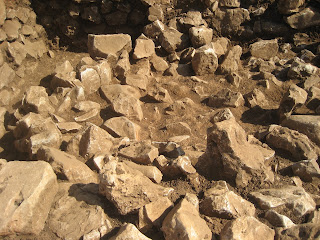 Recently, we found pottery with mud brick on top of it and some mud brick nearby. This is significant because this was found the adjacent room where Allen has been working and it may be an indication of a floor or of collapse. 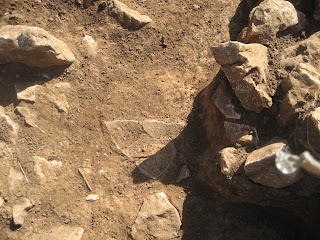 As we finish our final dig and begin our final sweeps to close the trench for the season, we have noticed that the once extremely rocky H2 section has become even and with minimal rocks whereas H1 that we thought would be less rocky has an abundance of rocks that we were unable to remove before the final sweep and pictures. H1 leaves much to be questioned about the rocks. Will we find more mud brick underneath these rocks? Is the extension of the wall bulk a continuation of the wall? These and other questions we hope to answer in the next season. 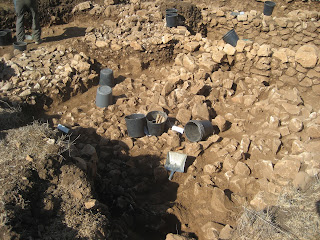 The Search for a Floor: One Students Archaeological Quest

Hello, I am an aspiring archaeologist studying at DePaul University who volunteered to attend this dig to see if archaeology was something that I really wanted to pursue.  After my first few weeks my confidence grew and I moved to a room that was partially excavated last season.  I spent weeks toiling through the rocks that had collapsed into the room hoping to see just a glimpse of the floor that I was working so hard to find.


A few days ago it happened!  I was excavating near the northern corner and a small semi-circle of flat stones appeared.  A few days later I removed a rock and underneath it, in the mudbrick, was the broken base of a Chalcolithic pot lying flat.  I had found it, the floor, my work had a resolution and I was thrilled.  This was by far the most exciting moment of my time here and it couldn’t have been at a better time.  I had found other great pieces of unique material goods but this trumped them all.

This was all great but there was one major problem, I did not have much time left.  I began to search in the soil and more and more pieces started to appear.  My spirits rose even higher, the entire floor may even be intact.  Then I reached the middle of the room and the rocks that had been my enemy for weeks reappeared, this time on the same level as my floor.  I was crushed, but I continued onwards and downwards.  I moved to the southern end and found even more floor.

As time ran out and our days dwindled I was unable to reach a resolution with the rocks in the center of the room.  Now I must return next season and see the conclusion of this interesting and elusive floor.  Through this experience I have realized that archaeology is not only a passion of mine but something that I hope to make a career out of.  I am amazed and grateful that this revelation was made.  I want to thank all of our wonderful donors, and the Oriental Institute who made this excavation possible and helped me to further my career.  I would also like to thank my amazing supervisors for their guidance and wisdom.

-A
Posted by AllenJReinert at 10:26 AM No comments:

Here is a 3D model of Area CC built from 45 pictures of the area taken with the GoPro hero 2 camera mounted to our quadcopter (as always, click the button in the upper right to get a fullscreen, and click and drag to move the model around):

And here is a 3d model of the whole excavation area. This is constructed from several dozen photos taken with the model plane. This model is not perfect, or too extensive, but hopefully these problems can be rectified:

Posted by Achiii at 7:44 AM No comments:

Marj Rabba is a Chalcolithic period (roughly 4500-3600 BCE) site in Israel's Galilee region (Marj Rabba on the map). You can read about our prior years' excavations in the OI's News & Notes, Winter 2012 edition. Or, if you would like to read about the Chalcolithic in general, articles can be found at the Oriental Institute's website here. Join us as we continue our excavations. Get involved by making a donation.

Wrapping Up the 2011 Season